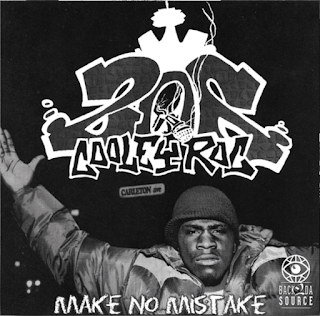 If you have enjoyed the previous releases from the 206 (Seattle, Washington, Tribal Affiliated) don't leave the Emerald City without this gem from Cooley Roc. "Make No Mistake" was previously only available on CD and Cassette format.

From Seattle in 1995 with beat production by "Stile Free",  Cooleys' west coast sound from the golden era on 2LP vinyl for the first time ever with full picture gatefold sleeve after almost 25 years.


Gatefold edition comes with custom tag insert (press sheet) to be used as a poster with album specific Graffiti Pieces by Piet Pado aka Nerco Black. Album is limited to the usual 300 copies on black wax and CD.


C: Unass Da Mic
C: 1 In A Million
C: Whats Dat Stile
C: New Improved Shit
C: R U Ready For Dis
D: Xenosoul Flavor
D: What U Need To Hear
D: What Do You Get
D: Make No Mistake
D: No Mistake Made

My special thanks goes to Cooley Roc, Stile Free and Back2DaSource. Shout out to UniKone. All copyrights reserved, posted for promotion use only. 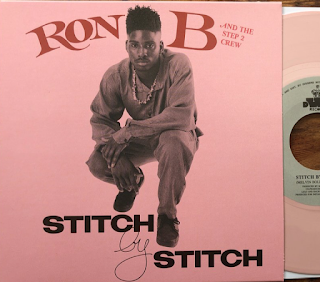 For all random rap fanatics probably one of the most long awaited represses of all time. Diggers With Gratitude makes it happen: Ron B And The Step 2 Crew - STITCH BY STITCH.

The original release is rarely seen, achieved prices of above $1000 in M/NM condition and is one of THE random rap classics from the early 90s. Originally released on Asiatic in 1990 ... oh and that piano sample is just dope as f#*k.

At first DWG planed the re-release in 12" format (DWG-028) with same track list as the original but later decided to switch to 7" format and skip the instrumental versions.

The 7" comes in two colored, standard black and pink. The pink version is exclusive to the DWG shop and limited to 200 copies. Some of the 12" test pressings went up for sale but sold out in less than 1 minute. They came in test press sleeve with stickers. A second run of test pressings was made on collectors demand.

A: Stitch By Stitch
B: Live Entertainer 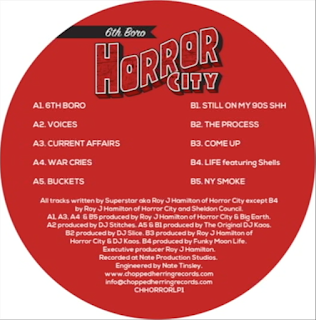 Chopped Herring Records first hooked up with Horror City in 2010 to release the "Prince Paul presents: Horror City 1995 Demos EP" which included some joints that were later reworked for Prince Paul’s "Prince Among Thieves" album. Also there was a two track 7" release.

The "6th Boro" LP has new rhymes over unreleased early-mid 90s beats from Long Island's Horror City. Superstar, the man behind Horror City, gets production support from DJ Kaos (of The Artifacts), DJ Stitches and DJ Slice.
The album is limited to 350 copies - the first 120 copies come on red, black mix colored vinyl - the other 230 copies are on traditional black wax.

A: 6th Boro A: Voices
A: Current Affairs
A: War Cries
A: Buckets 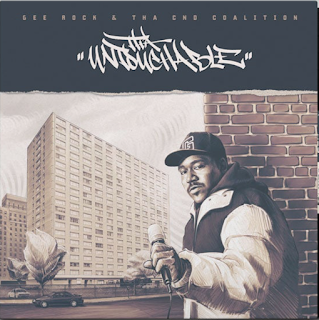 In 1993, New Jersey MC, DJ and producer Gee Rock released the debut album "Strait Outta Jersey" in collaboration with the CND Coalition.
Twenty years later the Heavy Jewelz gang pressed the album on vinyl but not enough in January 2020 another album of Gee Rock & Da CND Coalition drops and again HJR makes it happen.
The 2LP features 21 assorted tracks from Gee Rock's 90s archive. The majority come from his unreleased "Untouchable Project" recorded in 1996.
"The Untouchable" compilation is limited to 300 copies and comes in full color gatefold sleeve with liner notes and artwork from Spek Da Architek. Two stickers will be part of the deal.


My special thanks goes to Gee Rock, Da CND Coalition and Heavy Jewelz Records. All copyrights reserved, posted for promotion use only.